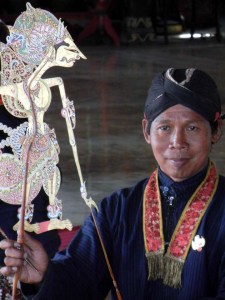 If Bali is the gem of Indonesia then Yogyakarta is most certainly the jewel of Java. I arrived by bus from Semarang and at first glance was a little confused by the amount of dust blowing around in the bus terminal.  I couldn’t remember Yogyakarta being this dry and gritty from previous visits.

The light brown soot caked everything. Buses and taxis appeared as if wearing Audrey Hepburn sunglasses. An effect of the wiper blades cutting through the dust and leaving two perfectly symmetrical arches  through which driver and passengers could view the oncoming world.

After a minute and feeling a little stupid I realized it was ash…more was to come.

I have visited Yogyakarta several times and always found the people here to not only be incredibly friendly but also fiercely proud.  They appear to display a joy in explaining the virtues of their city, ensuring you get from A to B without problem, and always requesting feedback, positive of course.

This question is one of a seemingly standard set that run the gamut from your age to marital status to profession.  A “No” answer to the marriage question will then take you on a whole other journey of questions designed to help the question giver gain insight into the western mind.

I am guessing it doesn’t do its job in revealing any answers since the questions being asked haven’t changed over the last 15 years.

Getting around Yogyakarta is easy.

Becaks are everywhere and for a small fee, will take you anywhere. The city ripples with history, charm, and character.  It is the center for arts and culture. From music, batik, and dance, Yogyakarta is the cultural epicenter on Java.

It is home to several world heritage sites with Borobudur and Prambanan being just two. It is also the home of the sultan and his palace is magnificent. There is nothing more regal than watching a gamelan orchestral recital in the middle of a sultans home, with you as his guest.

Yogyakarta is colorful, peaceful, interesting, and laid back. 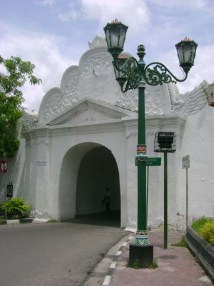 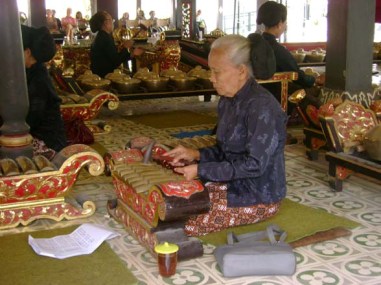 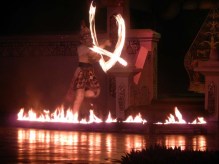 I would be ignoring the obvious if I failed to mention the current situation in Yogyakarta regarding the eruptions of Merapi.

The largest one was yesterday.

The mountain is 35 kilometers north of the city which, until yesterday, was considered completely protected by virtue of this separation. The direction of the crater points its blasts northwest; away from downtown.

I woke yesterday morning and opened my hotel room door.

It opens directly onto the hotel pool and allows me, on most days, to vacate my room and plunge into the pool in no more than a pair of well executed strides. The pool itself is surrounded by moss-covered walls. These in turn are adorned with plants hanging in pots shaped like Javanese masks. A river stone pathway meanders its way around the edges eventually leading to a cavernous hallway that exits to the world outside.

Today it was different.

Everywhere, in hotels, on the streets, people are out with buckets and hoses ensuring their city doesn’t stay grubby and grey for long.  Cars are being washed, streets swept, grass hosed down to bring some green back into the cities color palette.

It was impressive to see this collective effort by Yogyakarta’s citizens.

The pride I mentioned earlier is in full force. It has been 25 years since ash has reached this far yet everyone seems to know exactly what is expected of them. Not even a volcanic eruption was going to dampen the beauty of the city when a spit and polish was all that is needed to bring it back. 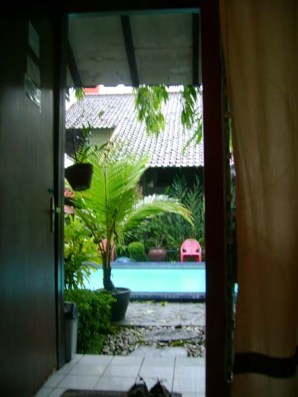 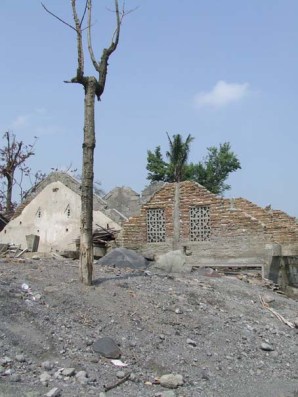 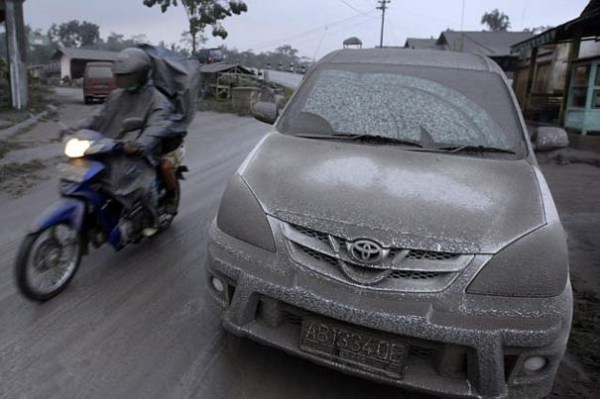 Of course there is another side to this tragedy and that is the loss of life.

Villagers trapped by the blast either inside or just outside the initial safety zone became victims of Merapi.  Farmers along with entire farms, and livestock were lost.

The financial and emotional burden to these people is enormous. The military stepped in, rescue efforts were mounted, and disaster funds created for those in need distributed. From watching the news it is eerily similar to Hurricane Katrina…only more organised and with a quicker response time.

It makes you wonder!

Tonight is another night. The safety zone has now expanded its circumference to 20 kilometers.  The nerves of the city are starting to show; especially for those of us who don’t live here.

Several expats have now moved out of the north and are seeking refuge in my hotel.  The mountain has had a tendency to get upset in the wee hours so it remains to be seen if I will wake to once again find my doorstep under the white ashen fingerprint of Merapi.