Like Ubud in Bali, Yogyakarta is the cultural and artistic center of Java. You can find everything here from fine art, ballet, dance, drama, music, poetry, and puppet shows to the manufacturing of silver, leather, and batik.

It is a city so incredibly vibrant that as soon as you enter, you are completely consumed.

You know you have arrived in a city that is special and it does not disappoint. No traveler to Java should by-pass Yogyakarta.

I spoke of the cities pride in an earlier post and cannot help but mention it again.
(see Merapi’s Fingerprint)

It is relevant to any heritage tour in a way that is opposite to the relevance of other cities.  You won’t find a large contingent of Dutch architecture here…there is some but not much.

What you will find is a wealth of Indonesian and world history.  Some that pre-dates the VOC, some that is original to the Dutch era.  A history of change and a history of rebellion against potential oppression.

What makes Yogyakarta unique in this regard is that they came out victorious. So proud is the nation of Indonesia that Yogyakarta was awarded “Special Administrative Region”  and remains the only province headed by a monarchy. During the War for Independence Yogyakarta was the country’s capital and remained so from 1945 to 1949.

I am running the risk of sounding trite but Yogyakarta is a magical city.

To the west the city is able to boast a 9th century Buddhist monument and to the east a Hindu one. Borobudur and Prambanan. Both located on the predominantly Islamic island of Java and both World Heritage UNESCO sites. To the north the unpredictable volcano of Merapi and to the south, black sand beaches.

In the center of the city there is everything from whitewashed and gold encrusted palaces to stalls lining the famous Marlioboro Road that sell anything from replica handbags to medicinal snake blood. The city does not have the major congestion problems seen elsewhere but rather has a flow that makes getting around a breeze.

This city has a lot to experience and discover. It will escort you back to another time alright but one that is different from any you have experienced so far. It’s a city oozing heritage, beauty, pride, and majesty. It is a city that should not be missed. 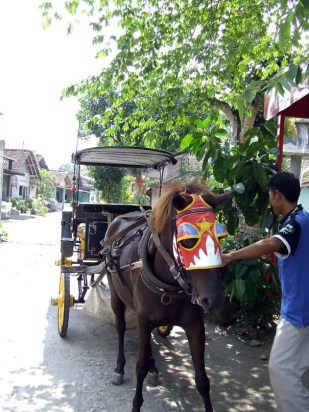 One of the reasons I stayed in Malang so long (almost a week) was because it’s gorgeous. It has a quiet charm about it that lulls you into a colonial sort of Mayberry state of mind. Where it would seem rude to lock your door, where the nasi goreng street vendor sells Hello Kitty mineral water, and the security guard at the bank was asleep every time I went in to use the ATM.

It’s a hill town with mountain air, blue skies, and huge mushroom-shaped trees lining the streets. It’s idyllic and that’s what makes its quirks stand out so much more.

I fell in love in Malang.

Bakso soup became my food of passion even before President Barrack Obama announced it to the world. It is hearty, tasty, and about as inexpensive a meal as you can get. Almost every night I would sit down with a bowl of bakso, some rice, and a drink and make short work of any post-lunch hunger pangs that may be raising their heads.

The best part..this meal would rarely exceed 10,000 rupiah ($1). The staff in the little family run restaurant were friendly. By day 3 they knew my name and what I liked. I felt like I could have walked in and said “the usual please” and got exactly what I needed. 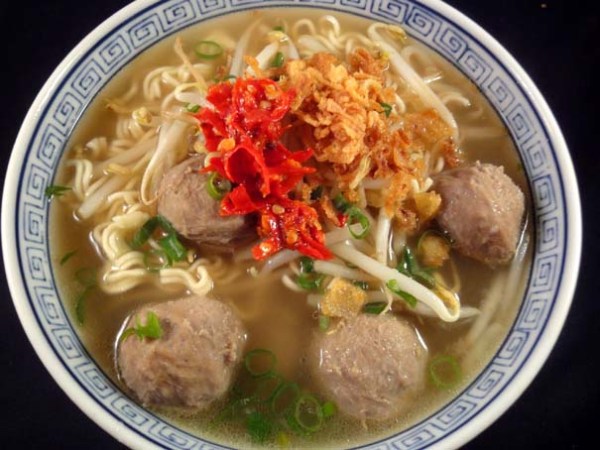 If however you are in Malang and in love with an actual person then the city has a quirky place set aside just for you.

L’Amour Fou located inside the museum-like Hotel Tugu is an homage to lovers everywhere.  Everything is deep red, grand, opulent, overwhelming, decadent, and heart-shaped!

From the sign on the door, to the love avenue hallway, to heart-shaped pizzas.  It is a place for lovers to relax and stare into each others eyes while reclining in the cabanas that surround the dance floor.

The rest of the decor has a very sheikh feel and by that I mean it’s similar to an oasis in the Sahara. The lighting is warm and comforting. The ceiling is star-studded and reaches up into the night sky.

To visit during the daytime would only ruin the effect of being captivated at night. I didn’t eat there as I had a lover of my own and bakso was her name.

Bakso and I carried on our culinary affair for 6 nights until I left Malang. I never found soup that tasted quite the same and absolutely never found soup quite that price. I found out later however that bakso had been carrying on a very close relationship with MSG and so I was unable to trust her anymore.

I never tried to replace what I had, I just moved onto Bali and ate fresh fish whenever I could.

20 thoughts on “Tales of Two Cities Yogyakarta and Malang”