Crossing over the channel from Java and onto the island of Bali, the crown jewel in the Indonesia archipelago, is an odd experience.  I left the town of Malang six hours earlier on a bus that spluttered to life.  With a recoil of black smoke we were on our way; it was the middle of the night.

I don’t remember arriving at the docks and I don’t remember the bus being loaded onto the ferry. I was sound asleep. What I do remember is waking to the jolt of it re-establishing its foothold on terra firma.

It reminded me of the days of the Dover to Zeebrugge ferry crossing between England and Europe.  Upon arrival you were in a different country. Exiting the bus was mandatory as you had to go through customs and immigration.

Arriving in Bali was similar in the fact that everyone had to disembark, lineup, and go through a passport control of sorts. All that was required was an ID and if the security guy could read what was on it in the dim light of the single bulb above him then he’s been eating a lot of carrots.

I could barely make out the silhouette of the person in front of me.

It was immediately clear that you were no longer on Java. The intangible ingredient that makes Bali special lingers in the air waiting for the newly arrived to understand its magic. Java maybe in the tropics but Bali is the quintessential tropical island.  Sea breezes, palm trees, long stretches of white sand, volcanoes, bamboo forests, thatched roofed houses, and temples as far as the eye can see.

At least one per house. 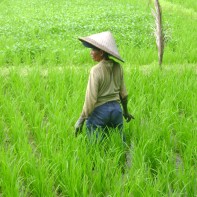 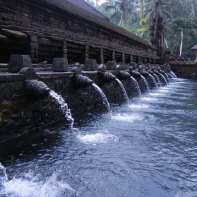 I realize that Java has all these things as well but in Bali they are all in one condensed place…a little piece of land known around the world as the “Island of the Gods”.

My first stop was Legian at a place called Three Brother Bungalows. The small village that gave birth to the Bali tourism industry, Kuta, lies to the east and can no longer be described as small or a village.

It is a pulsating mecca of youthful exuberance and Kuta caters to their every whim. It is chaotic, noisy, and a far cry from the real Bali.

Three Brothers is somewhere in between the chaos of Kuta and a more serene Bali that is the anticipation of every traveler to the island. Entering the grounds is like walking into your imagination of how Bali should be. The bungalows are all nestled in an amazingly lush tropical garden. Fruit trees, palms, and plants blooming with multi-colored hibiscus flourish everywhere. Rich thick grass underfoot with pebbled pathways lead you throughout. It is peaceful, serene, and close to the beach. The only sounds are your own or those of the birds and geckos that make this home.

I describe it with ease as an oasis of calm in the center of crazy.

Tomorrow I head inland to Ubud and then along the eastern coast stopping in a place called Pandang Bai; my two favorite places on the island. Ubud, the cultural center and Padang Bai a sleepy fishing village claiming three bays.

All of which have their own role to play in my happiness.

30 thoughts on “Bali, Island of the Gods”