In the late 1940’s Dutch Nationals living in Indonesia were sent home; to Holland.  My family were among the evicted; the only way out being by ship. Like most events from that era all stories seem to take on a life of their own, growing sub-stories that extend tentacles to unexpected places.

This one is no exception.

My family sailed home to Rotterdam on a ship called the Willem Ruys. A ship whose name means little now however in terms of world history she played an important role on more than one occasion.

This is her story.

The Willem Ruys began her maiden voyage on December 2nd 1947. Together with her main competitor and running mate, the MS Oranje, she became a popular fixture on the Dutch East Indies route.  When the East Indies gained independence from The Netherlands in 1949 and became known as Indonesia, passenger numbers decreased dramatically.

On January 6, 1953, the Willem Ruys collided, while crossing the Red Sea, with the MS Oranje, which was heading in the opposite direction. At that time, it was common for passenger ships to pass each other at close range to entertain passengers. During the fast approach of the Oranje, Willem Ruys made an unexpected swing left, resulting in the collision.

The Oranje was badly damaged and due to the possibility she would be impounded if she stopped on schedule at Colombo, Sri Lanka, the ship sailed directly to Jakarta. The Willem Ruys suffered far less damage. There was no loss of life and later it was determined that mis-communication on both ships had caused the collision.

In 1958, the Royal Rotterdamsche Lloyd and Netherlands Line signed a co-operative agreement to create a round-the-world passenger service. The joint fleet would sail under the banner of “The Royal Dutch Mail Ships”.  The Willem Ruys underwent an extensive refit to prepare her for this new service.

From September 20, 1958 until February 25, 1959, she underwent another major face-lift in Amsterdam, turning her from a passenger liner into a cruise ship. A hundred new cabins were installed and air-conditioning was extended throughout. The Javanese crew members were replaced by Europeans who required upgraded crew accommodation.

On March 7, 1959 Willem Ruys went off on her new world service to Australia and New Zealand. She departed Rotterdam, sailing via the Mediterranean, the Suez Canal and returned via the Panama Canal. The Royal Dutch Mail Ships became a popular alternative to British liners.

At the end of 1964, due to a drop in passenger numbers, Willem Ruys was put up for sale.

She was sold to the Lauro Line of Italy and renamed the Achille Lauro. Extensively rebuilt and modernized after an August 1965 on-board explosion the Achille Lauro entered service in 1966 carrying passengers to Sydney, Australia.

The ship also played a role in evacuating families of British servicemen caught up in the Israeli Six Day War; arriving in Cairo on June 1, 1967. 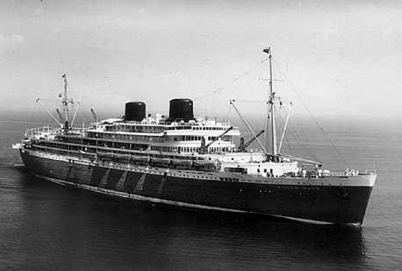 The Achille Lauro was once again converted from a passenger transport ship to a cruise liner in early 1972, during which time she suffered a disastrous fire.

A 1975 collision with the cargo ship Youseff resulted in the sinking of the latter, and another on-board fire in 1981 took her out of service for a time. She was laid up in Tenerife when the Lauro Lines went bankrupt in 1982.

The Chandris Line took possession of her in 1985.

On October 7, 1985, four men representing the Palestine Liberation Front took control of the liner off Egypt as she was sailing from Alexandria to Port Said. The hijackers had been surprised by a crew member and acted prematurely.

Holding the passengers and crew hostage, they directed the vessel to sail to Tartus, Syria, and demanded the release of 50 Palestinians held in Israeli prisons.

After being refused permission to dock at Tartus, the hijackers killed disabled Jewish-American passenger Leon Klinghoffer and then threw his body overboard. The ship headed back towards Port Said, and after two days of negotiations, the hijackers agreed to abandon the liner in exchange for safe-conduct and were flown towards Tunisia aboard an Egyptian commercial airliner.

United States President Ronald Reagan ordered the plane intercepted by F-14 Tomcats on October 10 and directed them to land at Naval Air Station Sigonella, a N.A.T.O. base in Sicily, where the hijackers were arrested by the Italians.

The other passengers on the plane (unfortunately including the hijackers’ leader Abu Abbas) were allowed to continue on to their destination despite protests by the U.S..

Egypt demanded an apology from the U.S. for forcing the airplane off course.

The fate of those convicted of the hijacking is varied:

The Willem Ruys / Archille Lauro continued in service. She was reflagged in 1987 when the Lauro Line was taken over by the Mediterranean Shipping Company to become the Star Lauro. On November 30, 1994, she caught fire off the coast of Somalia while enroute to South Africa.

Abandoned, she sank on December 2 of the same year.

38 thoughts on “What Ever Happened to Willem Ruys?”