In the late 1970’s Cambodia was ruled by a dictator named Pol Pot. It is because of him that Kampuchea, as it was then called,  takes its place in world history as one of several countries that has witnessed a genocidal maniac at the helm.

His reign of terror lasted only three years but in that time he managed to wipe out 25% of the population; an estimated 2 million lives. The mass graves of many of his victims are known as Killing Fields.

I visited one today.

On the outskirts of Phnom Penh, where city turns rural, are the rice fields of Choeung Ek. As you enter you are greeted by a huge pagoda built of white washed concrete and glass. Inside, and behind the glass, lay the skulls and bones of over 8000 Cambodian men, women, and children.

Their remains were first unearthed in 1980 and acted as proof to the world that genocide had occurred in Cambodia under the Khmer Rouge regime. A regime promoted into the UN, and then protected, by world leaders of several countries including the US.

To this day bones continue to surface in and around the graves when the monsoon rains come.

You are led through the fields by an audio guide that explains in graphic detail with first hand accounts of what happened here. There are no survivor stories but the guards who once worked there speak.

They explain in chilling unemotional narration what they did.

How men were blindfolded and made to kneel beside the pits sometimes 16 feet deep. A steel bar was used to crack them in the back of the neck. They would collapse to the ground.  If they remained alive their throats were slit using the serrated edge of palm branches from a nearby tree.

Women met the same fate but in many cases rape was the precursor to execution.

The method of this execution was particularly brutal. A killing tree is found in the middle of the Choeung Ek adorned with prayer bracelets where blood, bones, and hair of children was found embedded in the trunk. 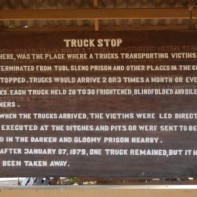 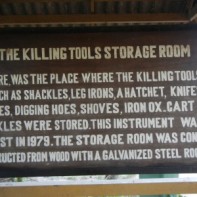 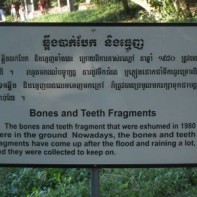 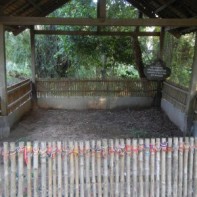 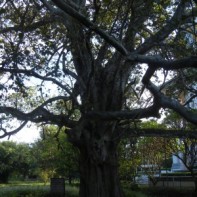 It is incredible to walk around Cambodia and know that everyone over the age of 35 lived through this era and has vivid memories of it. It is equally disturbing to realize that many participated in some way with the Khmer Rouge.

If you were against the party, or deemed to be, you are now dead.

Even today there is sustained support for the Khmer Rouge especially in the outlying villages. Bringing the perpetrators to justice has only recently begun and continues to meet obstruction as many want it to be left in the past.

Pol Pot himself never saw a day of jail time. He exiled to Thailand where he died in 1998. The court setup to deliver justice was not organized until 2003.

Charges of crimes against humanity and genocide have been filed against the four remaining party leaders but to this day only one has been convicted.

To this visitor of the Killing Fields the knowledge that almost no one has been held accountable, and there is opposition to seeking accountability, remains the hardest part to even attempt at understanding.

For charges of genocide to be brought against those responsible should not take 30 years. Click here for more…

The killing fields at Choeung Ek remain as a memorial dedicated to those murdered and buried in the mass graves. It is a gruesome and depressing testament to what mankind can inflict on his own kind.

So at this point you may think I am done.

Unfortunately the execution phase of creating a cleansed nation was the part most were not afraid of; it was the suffering that preceded death.  There were centers for torture throughout Cambodia but the most infamous was S-21.

I will not go into great detail here as the pictures will speak for themselves. My visit to S-21 was far more disturbing to me than the killing fields.

Only 7 people survived this prison which was a high school prior to the Khmer Rouge regime.

The paintings you will see are the creation of one of the survivors and depict true images of the brutality.  In one of the more disturbing features of the prison, now the genocide museum, they show a film where a former guard confirms all the images as accurate. he also goes on to talk about the atrocities performed on a daily basis.

In some parts he laughs as he recalls what he did and explains it away as simply following orders. He states that the regime was bad and rationalizes away any personal accountability. From what I have seen of several guard testimonies this is a common theme.

Click on any image to scroll in full screen. 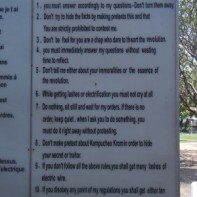 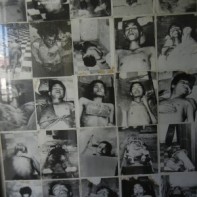 The Khmer Rouge were so meticulous at keeping records that every prisoner was photographed before torture and after execution. Each prisoner was made to complete a biography and in them they had to confess to bogus crimes and political affiliations.

Many of the confessions state that the victim was an agent of the CIA.

I  did not join the resistance movement to kill people, to kill the nation. Look at  me now. Am I a savage person? My conscience is clear. Pol Pot 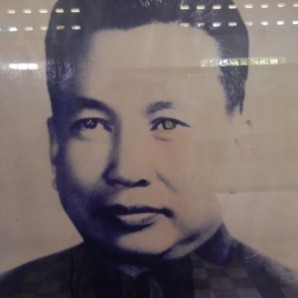 To learn more please click here. The information contained will fill you in on the history, the whys, and the how’s. I guarantee it will not provide any real understanding however.