I am going all out tomorrow with my temple exploration. I hired a tuk-tuk driver today named “Tea”, but I call him T for short, to take me around Angkor for a couple of days.

We sat for a few minutes this afternoon and went over the itinerary, making changes and perfecting it for maximum temple exposure. Plus we haggled price.

He is picking me up at 5am. Yep, that’s in the wee hours. Thank you jet lag! On a non-jet lag day that kind of early rise would be almost impossible. With jet lag, I am already up and about, showered and ready to face the day.

At 4:45am I looked out over the veranda into the pitch darkness. Silhouetted against the backdrop of the river was T; yawning and waving me down.

Sunrise over Angkor Wat was the purpose of the early departure.

With 3 day pass in hand I was dropped at the main gate to Angkor Wat, walked in complete darkness over the wet and slippery stone bridge. This spans the moat that surrounds the temple. It is a good 250 yards long if it isn’t more. Navigating the bridge in the darkness was challenging and if you went too close to the edge you were quickly reminded that handrails were a thing of the future and not part of the overall Angkor Wat design.

Keep in mind that the image you are building in your mind of me, walking solo across a bridge to one of the worlds most iconic sites is so incredibly inaccurate. Thousands of people joined me. It was like the march on Washington DC in the 60’s. Everyone vying for the best photo depicting the sun bursting out and enveloping the five spires of Angkor Wat.

There is a type of reflecting pool, two actually, that sit directly in front of the temple and therefore make a perfect photo foreground.

As the sun began to rise and with anticipation palpable, the clouds came rolling in.

People standing hundreds of feet away were burning flashes every few seconds attempting to create and capture light that didn’t exist naturally.

When the sun did break through and Angkor Wat was bathed in burning orange it was certainly a spectacular site and well worth the  arrival time.

The clouds then opened up and a downpour of monsoon proportions descended from the heavens; saturating the entire scrambling crowd. It was like watching wildebeest on their great African migration.

Next stop was Angkor Thom and the unique Bayon with its 216 smiling faces. It is an even larger complex than Angkor Wat and in my opinion more incredible. It is a photographers dream. So many ways to capture an image and move light around.

One of the most fascinating elements of the temples is the intricate reliefs carved into thousands of the exterior stones.

I am not going to go into too much detail about each and every temple. I figured you would rather see the pictures anyway. If you scroll over an image it will give you the name.

Click on any image and it will open to full size and you can scroll through the picture carousel. 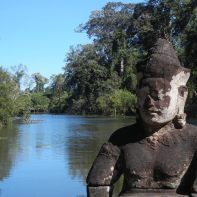 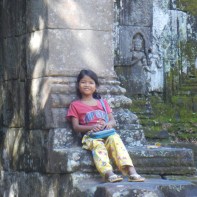 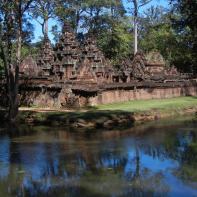 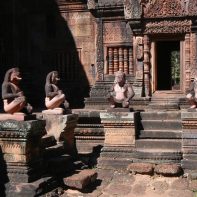 On day one T and I visited seven temples in seven hours. No breaks, just full on temple exploring.

By the early afternoon I was beat and so was T.

My impression of Angkor Wat after the first day was one of being impressed. I felt though that the temples of Pagan in Burma equalled them in awe-inspiring wonder. I also felt that even though Angkor Wat is the proclaimed premiere temple in the world I kind of have a bias  towards the Swedagon in Yangon; also in Burma.

Day two started out at a much more civilised hour. By 9am I was chomping dust as the tuk-tuk sped down the main artery to Angkor. We were heading further afield today and taking in some temples outside of the archeological park.

The first one, Preah Khan, is gorgeous. It along with Ta Som, and Ta Prohm have huge trees that have overgrown the temple walls; securing them in place.

Another unusual temple was Banteay Srei. Only here were the bricks made of red rock instead of the grey black found in all the others. Banteay Srei is 30km out of town and on the way back I stopped at the Cambodian Landmine Museum. An American ex-military man gives tours there and helps clear mine fields in small village area of Cambodia.

After the Vietnam war was over in 1972 the US soldiers went home. Unfortunately the residual effects of the war continues to blow people up. Several die each year and many more are maimed. One of his points was that if the villagers suspect there is a mine in a field it doesn’t matter if there are 500 or 5; they aren’t going to farm it.

When the minesweepers can clear a plot of land the greatest effect other than safety is that the village now has more viable farming land with which to earn money and feed themselves.

The museum also schools and houses 38 children. It is estimated that to clear all of Cambodians 5 million unexploded ordinances at the current rate, will take 300 years.

Another seven hour day was rapidly approaching and as we pulled into the entrance of the last temple on our marathon two day effort  I asked T what was different about this one. He laughed and dropped his head. He was as exhausted as me.

I am not sure if the early rise, incredible humidity, and subsequent exhaustion of day one had led me to be only moderately impressed but certainly after day two I was blown away. The scope of the area and the amount of temples open and unopened is staggering.

58 thoughts on “Temples of Angkor”