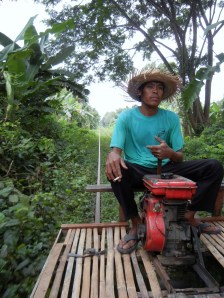 First impressions aren’t always accurate. My first impression of Battambang was pretty much the complete opposite of what I was expecting. I had read about all the French era colonial buildings that adorn the river. I had read of the towns charm. I equated both of these to a more genuine Cambodian river town experience. Coming off of my love affair with Siem Reap I was expecting a lot.

I was expecting a town with a tree-lined river skirted by a promenade of colonial buildings. The town center would have a dining and drinking area that was well maintained.

I guess I was expecting Siem Reap. I know better than to expect a duplicate of something I have already experienced.

Travel is for new experiences.

As I walked around Battambang I couldn’t believe how wrong my expectations were. Equating it to a ghost town caught in the dust bowl of the 1920’s would not be inaccurate. Cars and tuk-tuks kick up a layer of dust that hangs in the air engulfing everything. Visibility is affected and everywhere people are wearing masks.

It was a dust fog!

I ventured down to the river. Barren concrete banks and equally mundane bridges straddled the river. It was gently flowing and muddy brown though!

Mr. Scorpio was my tuk-tuk driver and he promised me a day of countryside exploration and unique experiences. If I was to do a second day with him he would show me how real Cambodians make a living.

Upon exiting the confines of the city center Battambang became entirely new. The country was where it was at, and to be honest I had been advised of this by a friend who had been here before.

The countryside was beautiful and the Battambang impression was beginning a paradigm shift.

Cambodia has single gauge train tracks and as such hardly any of the lines operate. These types of tracks are obsolete nowadays. One that does continue to operate is a 7km stretch that is used to haul goods and people through the countryside. As there is only one line it makes it difficult for trains to go in opposing directions.

Bring on the Bamboo Train.

A series of individually motorized box cars. The entire carriage is made of bamboo that rests on two unsecured axels with wheels. When a train encounters another going in the other direction the one with the least amount to unload is disassembled and moved to the side.

The second train continues and the first is reassembled on the spot.

The tracks these trains run along are incredibly warped from years of use and what appears to be seismic activity.

The San Andreas fault is straighter than these tracks.

There are sections where the tracks no longer align. A grinder has been used to smooth out the protruding edge. When the train wheel hits it you are simply jolted onto the other track. A temporary slowdown is required but that’s about all.

The speed at which these trains run is spine adjusting. Compare it to a horizontal roller coaster with the same noises, shakes, and rattles.

The ride was exhilarating and takes about 30 minutes to get to the end of the line. Here you are dumped off and your train now goes where trains go on a break; down the line a bit.

You are now in an area of shawl, t-shirt, and trinket shops all selling the same stuff at the same price. Kids were in abundance, tempting you with cuteness and rings made out of grass, to entice you to their shop.

Ten minutes later, after sufficient shopping time had elapsed, your train would reappear and the return journey would begin. Three times we met head on with other trains and on every occasion that train had to disassemble.

We had three aboard our train and some cargo.

The Bamboo Train was already a highlight of the day. Up next was the Golden gate Bridge Cambodian style. Built 18 years ago to span a river bringing two villages together. One side is farmers, the other professionals like teachers, shop owners etc. Both had use for the other side but in the past that simple collaboration had proved difficult. Hence the Golden Gate was built.

Not dis-similar reasons to the why the real Golden gate in San Francisco was built! 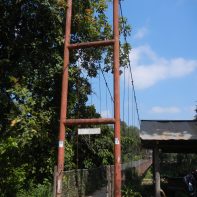 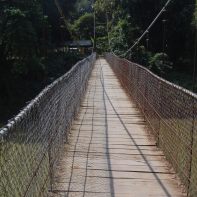 A more sobering stop loomed on the horizon as we headed to Phnom Sampeau and what is now known as the Killing Caves.

The trip out was across miles of lowlands and irrigating canals. As hills began to appear we entered the realm of Crocodile Mountain. So named because it apparently looks like a crocodile but I could not make it out. In contrast Mr. Scorpio also said it looks like the Titanic. I couldn’t see that either.

Maybe I need to start drinking some of the local brew!

Phnom Sampeau is a temple that sits at the top of the mountain. Golden spires 30 meters high pierce the sky and shine bright in the early afternoon sun.

Once on top a local guide explains what happened here during the reign of the Khmer Rouge.

The temple is slowly being restored and two monks live there full time. In the past this was home to many more. During the late 70’s the Khmer Rouge took over the temple and used it as a place to store rice. The Buddha and other relics were damaged as religion was outlawed. 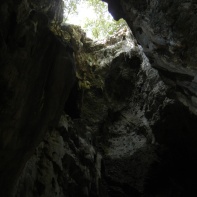 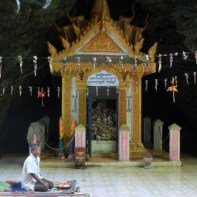 Nearby two large caves were discovered in the 80’s. Records were also discovered that showed that one of the caves was used as a place of execution. Prisoners were made to kneel by the edge, whacked in the back of the head and dropped the thirty feet into the cave. Whether they were alive or dead, once in the cave there was no way of climbing out.

Over two thousand skeletons were found here in the 80’s.

The smaller of the two caves was used in a similar fashion but for children only.

This is becoming a familiar scenario when talking about the genocide.

Skeletons piled high at the base of the caves and it was due to the incredible stench that the caves were first discovered. The job of clearing the caves and identifying victims became both a local and international task.

A crypt at the base of the main cave now holds many of the victims skulls and various other bones.

Our guide was a student whose parents had been victimized by the Khmer Rouge but not imprisoned. He was very informative but like so many other people I have listened to from around the world, when recounting stories of incredible injustice, their eyes are sad but their faces look to the future with happiness.

It is difficult to imagine the ongoing trauma of Cambodia and its people.

I asked Mr. Scorpio to take me out for a day two.

25 thoughts on “Battambang and the Bamboo Train”