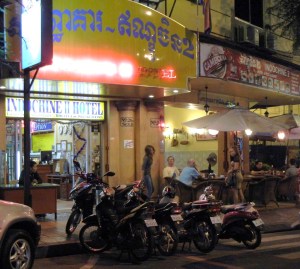 I arrived back in Phnom Penh last night taking the bus from Kampot. I was sad to leave for a couple of reasons I guess. One was that I just really enjoyed the place and its laid-back style  but the second reason was that leaving meant my journey was fast approaching an end.

I still had Phnom Penh to go but I had already been there so it was not new to me. I did decide to stay in another part of town than my previous visit and this proved to be a good decision.

Talk about black and white!

Where I had stayed on my arrival in Cambodia was more what you would call the residential side of Phnom Penh. People lived there. Commuted to work. There were corner shops, kids played in yards, and crossing the road was not an extreme sport that could easily result in injury.

Even though hectic on the main thoroughfares it was nowhere near the chaos and energy I was now experiencing at the waterfront. In particular the side streets of the waterfront area.

The curtain of nightfall brings with it a community otherwise unseen during the daytime. Bars which had previously been just iron doors with grates in front of them burst onto the scene. Names like the Pussy Cat Club, Bar Loco, The 69, The Candy Club, and dozens of others; all painted blood-red with flashing neon signs and an imposing dark interior. A cadre of young women spilling out onto the sidewalk. Enticing all male passers-by with a catcall or mid-air hip check followed by a wink and a smile. 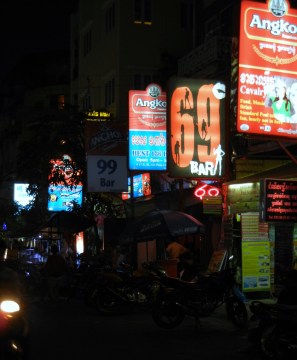 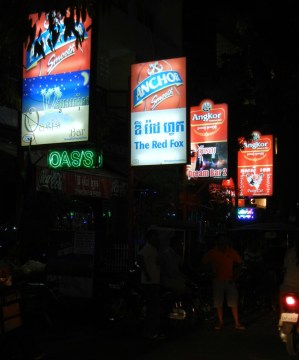 I hadn’t been feeling great when I arrived back in Phnom Penh but I woke this morning feeling worse. Tropical head colds are not like the ones back home. Those are usually experienced as the weather turns from good to bad. You curl up, stay warm, invest in an anti-histamine and a movie marathon.

In the tropics the weather is great, you have limited time to spend wallowing in self-pity, the air-conditioner is not your friend; so you venture out. Feeling sick as a dog in search of some medication that will make you perk up and return your attitude in tact.

The pharmacie on the corner had a packet of pills for a dollar.

I have had this before in India where I felt lousy. The local chemist gave me a bunch of round red pills in a brown paper bag and instructed me to take 4 a day with water. The healing power of these magic tablets was so immediate I ended up returning to her and buying more for future use; if needed.

This was a similar situation except the pills were light green and I only had to take 3 a day; with food not water.

I don’t know what it is about these countries and their cures for the common cold but I have never had one that lasts very long after a visit to a local chemist in search of the proverbial hammer.

With the light green elixir doing its work I set off to be encased by the world’s tenth largest dome.

An art deco one at that! 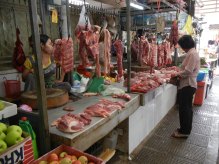 A shopping center on steroids under one huge non-climate controlled roof. But you wouldn’t know it. The market is so well ventilated by the dome that upon entering you are relieved of all concerns regarding the typical sweltering market experience. The dome so high that for the first time in weeks your sense of personal space is returned to you.

Bargaining in any market is the name of the game. Especially as a foreigner the best you can hope for is to not be taken for too much of a sucker. You will never get local prices but you can try, fail and enjoy the whole process. Reaching a price that allows you to walk away from that vendor without hearing snickers in the background has got to count as a good purchase.

With my swag of T-shirts, sunglasses, and gifts for folks at home I sat down on a blue plastic chair next to the bloody fish head sales lady in order quench my thirst.

I still had a couple of sneezes in me and these made the young water sales girl recoil in horror as she realized my sickly state. She stepped back further into her space, checked the tightness of her baby blue face mask, glared at me with eyes that spoke in very plain English.

MOVE AWAY FROM ME AND MY WATER CART NOW!

The Raffles Hotel is an icon in several cities throughout Asia. Singapore, Beijing, Manilla, Siem Reap, and Phnom Penh. It is a hotel by which other hotels hold up as a standard and attempt to emulate.

In the heat and humidity of Phnom Penh I sought out the hotel as an oasis with a pool. A place my light green cold potion could continue its healing ways. Where a lounge chair waited for me. A cold drink, a waiter in a suit, and manicured lawns. No dust, no dirt. A place to relax.

It was everything I had hoped for. The lounge chair enveloped me and like a tempurpedic memory foam mattress it cradled me. Before long I was in the land of nod. Nod being a place I was not really allowed to be at. 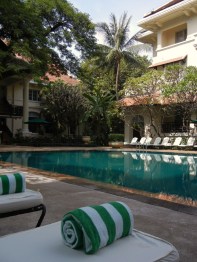 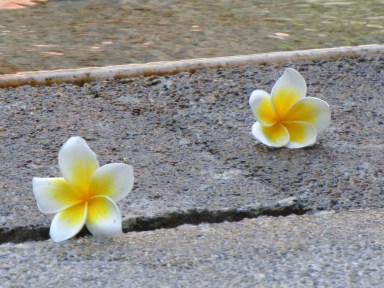 I felt good; ready to hit the streets and see a Wat. One of the places on my list that I had not visited before was Wat Ounalom.

Originally built in 1448 this was a temple that had seen the ravages of the Khmer Rouge but also the dedication and determination of the people following that era. Statues had been desecrated but painstakingly rebuilt piece by piece. Relics had been cast away into the Tonle Sap River but retrieved years later and returned to their rightful place. Monks had been killed but like all over Cambodia the religious population was making a strong comeback into daily life.

I meandered though the complex. The age of the buildings was evident. Monks wandered everywhere busy with the routine and schedule of their lives.

A large golden stupa lay off to the side surrounded by a fence. The door was locked and there were no plaques indicating its history although it was obviously an important one.

An elderly monk stood beside the locked door and waved me over. With a broad smile he held up a set of keys. Almost like a child who was about to do something he wasnt supposed to. A mischievous smile.

He unlocked the door to the stupa and invited me inside. It was hot, dark, and the smoke of incense filled the air. The monk began to pray and suggested I follow suit. He handed me an incense stick and I lit it.  I was kneeling two feet in front of the Buddha statue with no rope barrier; this alone was unusual.

This was a special place but I had no idea why. The monk began to pluck at his eyebrow and convey to me the message that would allow me to understand why this was a very special place.

Many stupas I have been to are built upon or surround various remnants of Buddha himself. This one contained an eyebrow hair.

The monk and I sat inside the stupa for 15 minutes until the heat finally drove me out. I felt like something very cool had just happened and was grateful to the monk for providing me the opportunity; I felt privileged.

It made my day. 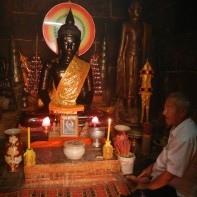 I went and sat at the riverfront and as the sun went down on my last evening in Phnom Penh I felt less saddened about leaving and more excited to return. Next time I would be back with Alison and that would make the trip even better. We had shared this adventure as much as possible but electronically conveying the experiences of a country like Cambodia is difficult.

Next time we would create memories together and I looked forward to that.

27 thoughts on “Into the Abyss”