The Foreign Correspondents Club in Phnom Penh stands as a testament to both journalism and history.

So many stories patched together for the consumption of the outside world who knew so little of what was actually happening here.

So many tensions alleviated via humor and booze soaked evenings overlooking the Tonle Sap River.

A meeting point for folks who spent their days working in the complex underbelly of a nation in crisis. A relatively safe harbor and a buffer between two worlds; where covert met intrigue, where making deals with the devil were not so uncommon, where lawlessness reigned supreme.

To some extent that same lawlessness operates unabated today.

You want to shoot a rocket launcher at a cow; apparently $350 will put your finger on the trigger!

The FCC operated in a similar fashion to the Rex Hotel in Saigon. The Rex served as a center for journalists during the Vietnam conflict. The rooftop bar played host to soldiers on leave, journalists on assignment, CIA operatives, consulates, foreign ministers, dignitaries, celebrities, and opportunists.

In either place a wartime cocktail of heat, courage, adventure, and truth existed. Finding its outlet in the written word. Conveyed to an audience thousands of miles away who had little comprehension of what was really going on. What it was really like. The price you paid for knowing this first hand was the razors edge of danger and sometimes even death.

In the 70’s the foreign correspondents who made this their beat walked a tightrope for sure. The country was crashing in around them yet they were bound by a sense of duty, or more possibly an intense distaste for the conventional norm,  to report the events to the world. 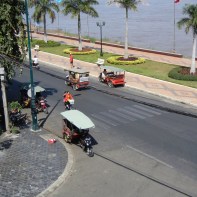 Today the Foreign Correspondents Club continues on as a bar and restaurant. On the walls are black and white photos depicting the countries troubled past.

Like so many buildings around the world this one oozes a sense of history and nostalgia. For me, places like this become beacons where I can sit and soak up the past.

Through every pore, by the use of every sense, and by a vivid imagination I can carry myself back so that a bird’s eye view becomes available to me…just a glimpse, just a flicker, but it seems very tangible.

On my final day in Phnom Penh I decided to write here in this place. Jot down my impressions of Cambodia. I felt that by doing it here I would have a greater chance of adequately describing things the way I felt them.

Put them into a context that would render them with the utmost clarity.

It’s a country I am absolutely sure I will return to but first impressions only happen once.

I want to capture those.

Cambodia certainly plays upon a mosaic of emotions. I have been asked many times over the years what my favorite country is. My answer has always been long as this type of question cannot be answered in just one word; one countries name. It depends what you are looking for.

I could say Indonesia or Thailand because there are some great beaches where partying all night long is commonplace. Fun is the prize and its readily available.

I could say India because it assaults you. It makes you unlearn everything and if you last long enough it gets under your skin. You don’t know why but you fall in love with it, you just do. You fall in love with the chaos, the lying, the dirt and dust, the colors, the noise, the craziness.

I could also say Tibet because like Cambodia it is host to a horrific modern history. As you journey through it your emotions are taxed. From the warmth and generosity of people who have little, to the stories they tell, with a smile, about the subjects relevant to their lives.

Kidnappings, beatings, murders, and other atrocities inflicted upon one human by another. There are plenty of people in the world today who know little else. Their lives have been so fully oppressed that recalling a story, even a happy one, is far from what we would deem happy by any stretch of our imaginations; its one of the saddest things to witness.

Another human completely void of a joyful recollection.

To me, a departure from my zone of comfort is what makes travel such a worthwhile endeavor. It opens your mind to the depths which man has, at times, sunken but it also spot lights in a resounding glow the pinnacles to which he has risen.

The two cannot often be reconciled.

It is here, when you find these extremes in one country, that you can understand your own privilege. It is here, bracketed by opposing circumstances on a rollercoaster of emotions that I find my favorite countries.

Not everyone’s cup of tea I realize but our world is not all chocolates and roses.

It had been several years since I had been traveling in a country that brought this sentiment home to me in a resounding thud. Cambodia allowed me the privilege of seeing the worst with the best. The valleys were most definitely deep; the peaks most definitely soared high.

I guess you could say that about any country but because Cambodia has such extremes it makes you choose how you are going to feel.

It’s like someone you meet who becomes a lover. You can choose to love them or bid farewell and never really commit to looking under the hood of possibilities.

It doesn’t force its love under your skin like India does; you must choose. It doesn’t have the sophistication of Thailand to seduce you, or the “in your face” smiling aggression of Vietnam to beguile you, or the innocence of Laos to charm you…you must make a deliberate choice.

To understand Cambodia is to ask too much.

My description of Cambodia is a personal one and was not intended to be a brochure type sales pitch. The country has within its borders all the beauty found in other South East Asian countries. It is a quintessentially exotic part of the world that is mending and changing.

Cambodia is a destination worth undertaking. To see it now will be a very different journey than to see it in ten years.

63 thoughts on “Our World is not all Chocolates and Roses”