Back in the days before internet, email, and Skype. Back when a bogus collect phone call home was enough to let your loved ones know you were still alive. Back when postcards had a 50/50 chance of arriving at the correct destination; I got a gift.

In 1986 my sister sat by my side a small furry brown package with large white eyes and a heart that beat out of his chest.

He was as innocent and green to the ways of world travel as I was yet he was now under my care. The responsibility of this however, was lost on me. I was invincible and therefore by association, so was he.

We set out from Auckland on April 12th of that same year prepared to take on whatever the world threw at us.

We were going to have a blast and explore the planet.

My furry friend and I road-tripped through the United States taking on a southerly route. We encountered huge canyons, lone Indians, crazy Texans with huge slices of toast. We stayed in Las Vegas hotels that would later be demolished by explosives on live TV.

That would be the Landmark Hotel.

We skied black diamond runs in a place called Purgatory and one of us drank a little too much local brew at high altitude. We saw Andrew Jackson, listened to the players of Preservation Hall, and got a swift kick in the head by a Hurricane…at least that’s how it felt the next day.

By the time we arrived in New York city he had become the center of attention from all those I was now traveling with. His place of honor was a perch atop the rear view mirror. Depending on how bumpy the ride was he could look forward and see what was about to be, or he could look back and resume his lofty role and spearhead the topics of conversation.

He was in his element; a traveling Kiwi!

After leaving the U.S. we made our way to Europe. Here we settled for a couple of months at the Tom Cribb pub where I was a barman, cook, and general dogs-body. Then it was back on the road.

Our focus was Greece, Italy, France, and Holland. A single sleepless, bone jarring 72 hour bus trip from London to Athens set us on our course. 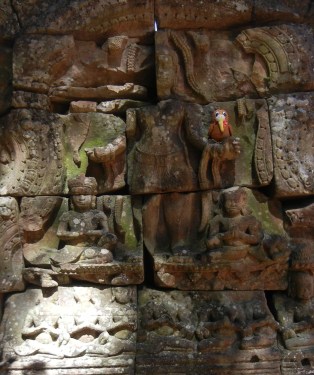 After Europe we traveled through South America and it was here in a market that he received his official name.

Again the center of attention in a market that sold everything from dried llama fetuses to bowler hats, an old Bolivian lady made him a string bracelet adorned with the name she felt most appropriate.

Emblazoned on a sky blue band with pomegranate red lettering was the name Bruce!

We set our sights next on the African continent and then Asia. In Laos he once again became a focal point from new friends who even today, some six years later, ask about his well-being.

He and I have traveled the world and amassed thousands of miles across 60 countries. Both of us getting our stuffing shifted in the process but that was to be expected I guess. For over twenty-seven years now we have trotted about the globe.

This trip to Cambodia was definitely not our last.