A historical perspective of life in colonial and post-colonial Indonesia.

Immediately following WWII the Dutch East Indies found itself embroiled in yet another conflict. This time the fight was with Indonesian nationalists striving to attain the lofty ideals required to form a republic rather than the exploitation of commodities that had catapulted the islands into violent struggles in the past.

They were demanding from the Dutch colonialists the right to pursue independence on their own terms and were fully prepared to take up arms, dictate the timeline, and sacrifice life in order to achieve their goal.

Considerably weakened by years of fighting the Japanese, the Dutch army was now in no condition to take on a new adversary.  Over the next 7 months the island of Java would bear witness to a mish-mash of nations either fighting, protecting, or attempting to remain neutral.

The British, Japanese, Dutch, and Indonesian forces were destined to clash.

At the outset confusion was prevalent. Dutch civilians who had been the captives of the Japanese for 3 ½ years were now being protected by them and in a cruel twist of irony had to remain behind the walls of their concentration camps for survival.

The British were on their way to act as a neutralizing force and would attempt to peacefully resolve the issue.

The Dutch were fighting to hold on to their colony and the Japanese, whose role had been turned upside down, were ordered to both protect the Dutch civilians and remain neutral.

It was just a matter of time before sentiments would change.

The mood directed at the Dutch, Japanese, and Indo populations would become hostile. Indo men were arrested, beaten, and killed for allying themselves with the Dutch. Violence erupted all over the island and fighting back seemed the only option for all concerned.  Regular violent clashes sprang up in Batavia, Bandung, Surabaya, and Central Java for months.

The Indo population became victims of the revolutionary war cry and were verbally reduced to being dog-like by nationalist leader Sutomo who pronounced, “Torture them to death, destroy those bloodhounds of colonialism to the root. The immortal spirits of your ancestors demand of you: revenge, bloody revenge!”

Over 23,500 Indo-Europeans were killed or disappeared in the 7 month span from the end of WWII to March of 1946 when the Dutch began entertaining the idea of resolving the situation through verbal, peaceful negotiations.

The Bersiap period lasted from August 17 1945, following the nationalists’ declaration of independence and the birth of the Republic, through December 1946.

The full scope of the fight to maintain this independent status however, would last several more years.  After months of talks and failed attempts to crush the revolution, the Dutch succumbed to international pressure and formerly handed over sovereignty on December 27th 1949.

Through the late 1940’s and early 1950’s thousands of Dutch and Indo families boarded ships for the 3 week voyage to the Netherlands.

Their journey would take them through the Suez canal, stopping in Port Said, Egypt, for clothes more suitable to the colder Northern European weather; then onto Holland.

For many Dutch and Indo’s this was a land on which they had never before set foot.

As it was for my family, and many others, this was far from a joyous day. This day and this voyage represented a departure from the only life they had known.

Many were born on the islands. 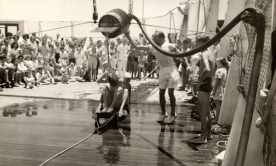 Much more than geographic distance separated these two nations. Culturally there was little, if anything, in common. The journey represented the last moments of tropical life for many and I can only imagine that the fun and games of the voyage was merely a mask temporarily banishing an underlying sorrow for a lost homeland.

Upon arrival in Holland it was not only the weather that had a chill to it but also the reception.

The Dutch in Holland looked down upon their returning countrymen from the Indies. The perception was that they had all lived a life of extreme privilege. That even the consequences of the war had left them untouched; how bad could it have been to be imprisoned on a tropical island was the overwhelming sentiment.

The Indo population was treated even worse.

Many of them had fought alongside the Dutch upholding the colony of Queen Wilhelmina. Many hadn’t wanted to leave Indonesia at all but were either forced out or vehemently encouraged to depart and seek a new life abroad.

Trapped now between countries and seemingly not welcome in either.

Verbal abuse, ignorance, hardship, and betrayal were what greeted many as they arrived in Holland. The economy was suffering and Holland was in a crisis. Making a living was difficult for those that deemed themselves more worthy let alone those who had just arrived from the tropics.

For these reasons, and the weather, many families once again boarded ships bound for the US, Australia, New Zealand, and Canada.

Many countries offered free passage in exchange for a 2 year work commitment.

Thousands of Dutch and Indo’s took advantage of these opportunities.  My mother and her sisters among them. Their quest for a new homeland and a better life continued. In doing so, it dispersed two populations with a common place of birth throughout the world…provided the weather was good!

They left Holland and settling all over the world.

My mother and her sisters found a new home in New Zealand, Australia, and for a brief moment, South Africa. Other relatives dispersed to Canada. My Grandfather and Grandmother remained living in Holland. He died in the 70’s missing his old life in the Indies while she went on to live many more years and in one more country. She eventually passed away in a small town in tropical Australia where she lived her last years in the company of her eldest daughter, my aunt.

37 thoughts on “Departing the Indies”