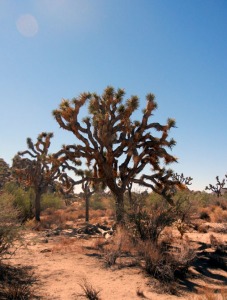 There are national parks all over the US.  Their names more often than not bring forth a quick nod of acknowledgement and an audible sigh of respect in recognition of the natural beauty represented.

Some, like Arches, Bryce, Zion, are well-known and considered remarkable gifts of nature however there are others that reach iconic status around the world for the images they conjure and the wonder they afford anyone who has the privilege of visiting; Grand Canyon, Everglades, Yosemite, and the oldest of all; Yellowstone.

There are 59 national parks in the US and from the ones I have seen they are all worthy of their status as protected communal sovereignty.  Land set aside to enjoy in a natural untouched state; where the sole purpose is for man to enjoy a peaceful co-existence with the earth and bask in its raw and undeniably perfect form.

Joshua Tree is one of these national parks.

A little less well-known than some, as it was only 1994 when she joined the ranks of the protected, but equally as breath-taking. Home of a very particular and revered tree whose erratic branches make it look more like a Dr. Seuss illustration of fiction than a creation of Mother nature.

The name, Joshua, was given to the tree by a group of Mormon settlers who crossed the Mojave Desert in the mid-19th century. The tree’s unique shape reminded them of a Biblical story in which Joshua reaches his hands up to the sky in prayer.

Joshua trees grow in a very specific area and that area is the heart of the national park.We drove in for the first time at night. Black as night can get. The kind of darkness where a hand in front of your face is difficult to see but the sky itself is lit up by the glint of millions that make up the Milky Way.

The light from the night sky cast the trees in a play of silhouettes all vying for the ultimate ascent. The desert could not be seen but it could be felt. The quiet could be heard as it was so peacefully obvious. The universe wrapped itself around you making your insignificance feel special; acknowledging you as an integral part.

The stillness was mesmerizing; the park had already won me over.

The sun rose bright and early; beginning its daily scorch and bake.  Re-entering the park in daylight was an entirely different experience than the night before. Not a bad one, just completely different. Absolutely nothing looked the same and to pinpoint where we had stopped to gaze would have been impossible.

The Joshua Trees were now goofy as opposed to being somewhat menacing. The rocks now rose from the ground like temples; some resembling human faces. The park had come to life and even though still peaceful it was definitely awake. Which now that I think about is the exact opposite of what was really going on since most of the animal life in the park is nocturnal.

It was already too hot by 9am to hike anywhere. The ground temperature hovered around a steady 105 degrees and was unrelenting. There was almost no shade. Many times my thoughts wandered to what it must have been like to live on this land a century ago.  Void of any obvious source of water, vegetation, or shelter.  A land we would describe as hostile to human life, yet humans lived here.

But it was a different place back then. 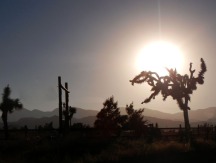 There is an area within the park known as Hidden Valley. It’s not a large area. Only a mile around with a surface area of 55 acres. It was inside the walls of this valley where grass grew, water flowed, shade was offered in abundance. It was here that a surprisingly successful criminal enterprise blossomed.

The valley had a single narrow entrance-way that acted also as its only point of exit.

Back in the 1870’s a pair of brothers, Will and Jim McHaney, and their band of cowboys known as the McHaney Gang were known for stealing cattle and horses and hiding them at Hidden Valley. They would re-brand the cattle, fatten them up on the abundant vegetation, and then sell them off to cattlemen in other states.

The boys, Jim and Will, took up ranching and initially set up a summer range in the San Bernardino Mountains wintering cattle down on the warmer desert country to the east. Other members of the gang entered the picture at various times, the Button brothers who discovered Hidden Valley, Charlie Martin, the son of a family of early settlers in the area, George Meyers, a desert rancher and Ike Chestnut.

It was suspected that these “boys” were stealing cattle from the surrounding ranches but it was never proven.

All public lands were open to cattle during this period. It was called “the open range”. Natural water sources and availability of forage, not property boundaries, determined the extent of livestock activity. The once-a-year-roundup served to separate each rancher’s cattle and brand the calves before relocating to summer pastures in higher country.

Those out there to steal another ranchers stock had best grab a few and ship them to market as quick as possible so as not to allow re-branded stock the chance to mingle on the open range.

Around 1888, Jim McHaney decides to try his hand at mining gold. Some accounts say that he and Charlie Martin forced, at gun-point, a fellow by the name of Frank L James to sign over his claim to the Desert Queen Mine, and that after he signed Martin shot and killed him. Later Martin, with Jim McHaney, as his witness, pleaded self-defense and was found not guilty.

An article in the Redlands Citrograph (August, 1895) states that “James McHaney, one of the owners of the now famous Desert Queen Mine was in San Bernardino on Monday, bringing in another sack of gold, the product of four and one-half days’ worth $8,000.”  It’s clear from the articles that Jim McHaney became a successful miner and owner of a well documented highly productive gold mine. How he came by it will likely remain a mystery.

Charlie Martin got in a lot of trouble with the law in his youth and in 1877 was found guilty of robbing a drunk and sentenced to five years in the state penitentiary. After he got out he homesteaded two quarter sections of land and began raising cattle.

The ranch proved profitable and expanded to become known by the Heart Bar brand. Martin sold his interest in the ranch in 1914.

In 1917 Charlie Martin was appointed Chief of Police for the city of San Bernardino.  Upon his retirement he returned to the Heart Bar Ranch homestead; after his death this property was converted into a Forest Service campground.

James McHaney was sentenced to 17 year in prison. His brother Will vanished and his fate is unknown.

The valley is no longer hidden, no longer has grass, or water, and is no longer accessed by a single narrow passageway. The mile long hike takes you around one of the most visited places in Joshua Tree and is well worth the effort even on a day like today where the temperature exceeds hot.