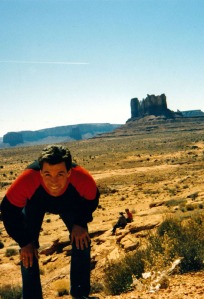 I arrived in London on a direct flight from New York in the summer of 1986; sometime in early June. I had spent the previous few months traveling across America from west to east; coming to terms with a sense of euphoria that is so often the companion of travel and relishing every moment.  It was new to me.

A complete and utter feeling of freedom that provided a natural high; one that will be chased forever…like a rainbow. I am sure comparing a passion for travel to drug usage is a little over the top but there are definitely some parallels.

Travel can become all-consuming and in my early years I sacrificed more than one relationship or job opportunity in order to satisfy the craving.  To chase the sun over multiple seasons, to seek out unusual destinations, and experience things most would never.

It was a thrill ride and I was not looking for it to end any time soon. In fact my arrival in England was the start of an amazing chapter I feel lucky to have had the good fortune to be a part of.  A chapter I knew was extra-ordinary from the very beginning.

I took some time to reflect on where I’d been and how I had arrived at this moment.

Traveling the US from coast to coast had always been my focus from the moment I decided to embark on this adventure.

The possibility of accidentally running into Keith or Danny Partridge, living a California dream with the beaches and bikinis, stumbling onto a ghost town in the desert, or gambling as a high roller in Vegas were all part of it.

Some of these thoughts were embedded from childhood with others coming along later. In a way forming layers of impressions and fantasies that had little chance of ever coming true.

Los Angeles was where I first touched down on US soil. I would spend my first week in Anaheim where I would visit the usual tourist suspects. At night I would hit local clubs.

I have two very distinct memories from that time.

One was that the all night partying supposedly going on in America was pure fiction. Bars closed earlier here than back home in New Zealand and they were strict; carding you wherever you went.

That bubble burst in a hurry!

The second is of a girl I met at one of the nightclubs. She was sitting at the bar and seemed to know everyone. Long blonde hair; gorgeous. Just the way California girls are supposed to look, right?  Straight off the beach and out on the town.

We got talking and had a couple of drinks; she even bought one round which was a pleasant surprise; I was very impressed.  She told me she was a model and had recently been in Playboy magazine. I was lapping it up in tandem with courage and confidence brought on by the gin and tonics.

This was America and I was here! Life was good.

To top it off she was nice; sexy to boot. I asked her to come onto the floor and dance with me.  I didn’t have many lines and even fewer moves but figured dancing was a good way to keep things lively. Her smile was replaced immediately by a scowl. If her look could have killed, I’d be dead.

I guess everyone else in the bar knew but how was I supposed to know.

She spun around on her stool and asked if I was joking. I hadn’t been but could see why she might think so. I apologized profusely. I had no idea. We talked a little longer and she explained she had lost both legs in a car accident.

I am not sure what prompted her photo spread in Playboy but she was in it. The barman pulled out a copy and there she was.

But now my feet were firmly planted in London, England.

At first I took on temporary jobs as all us antipodeans did.  A barman at the ‘Tom Cribb’ in Leicester Square, a clerk at a no-name law firm, and an analyst at the now bankrupt ‘Drexel Burnham Lambert’ investment bank; home of the junk bond king Michael Milken.

Then, with the travel bug biting firmly and me growing tired of cubicle life, I decided to take to the road permanently; that’s why I went abroad in the first place.  I could have stayed at home if working in an office had been my dream…but it wasn’t.

I handed in an application to one of the tour companies in London.

Top Deck Travel and their conspicuous orange and beige colored double-deckers became home for a good part of my twenties. I rode high on the second level of a bus and with them I would get to see more of Europe than I ever imagined.

From Paris, Barcelona, Munich, Rome, Athens, Dubrovnik, Istanbul, Geneva, Brussels, Amsterdam and every city or small town in between. Every tourist attraction and culturally significant landmark both bitter and sweet I was fortunate to visit multiple times; re-living each experience through the eyes of the newly arrived.

Those years were a perfect intersection of age, inexperience, wonder, curiosity, and fearlessness; combined with the inability to suffer a hang-over, boundless energy, and a ceaseless appetite for the opportunities lurking on the greener grass around the corner.

It kicked my passion for travel into high gear. I am exhausted just thinking about it 🙂

36 thoughts on “A Double Decker Life”