It was just days ago that I felt the freezing cold temperatures of a Chicago winter against my face.  The accompanying icy bite of wind chill forcing its way inside both nostrils, turning breathing into a conscious choice; one that delivers a throbbing pain with every inhale.

I escaped the January onslaught and today I find myself soaking up the summer sun resident over the opposite hemisphere. It is morning, the sky is blue, the temperatures are rising and the water is sparkling around Cape Town, South Africa.

I spend my first couple of days exploring the city, its museums, gardens, parks, and the surrounding countryside; climbing Table Mountain and heading south on the peninsula to the Cape of Good Hope. It’s a breathtakingly gorgeous city; an outpost of good taste and relative progressive tolerance.

The history of South Africa is an important one to remember.

Robben Island is visible from the top of Table Mountain and sits as a testament to oppression, perseverance, freedom, and forgiveness.

It was there that Nelson Mandela spent 18 of his 27 years behind bars as a political prisoner before being freed in February 1990. This was a key moment in the history of South Africa and initiated the true start for the process of dismantling the apartheid system; a system of legal race segregation, black, white, colored, Indian, imposed by an all white government that had ruled the country since 1948.

Under apartheid, non-white South Africans, the vast majority of the population, were forced to live in separate areas from whites and use separate public facilities; contact between the two groups would be limited.

Marriages and sexual relationships between groups was outlawed.

A series of Land Acts set aside more than 80 percent of the country’s land for the white minority, and “pass laws” required non-whites to carry documents authorizing their presence in restricted areas. Non-whites were denied participation in national government.

To further protect white interests, a system referred to as “separate development” was introduced in the late 1950’s. This system created “Homelands” for black South Africans. The effect was to separate further, black South Africans from each other, enabling the government to claim no black majority, reducing the possibility that blacks would unify into one nationalist organization. Every black South African was designated a citizen of one “Homeland”.

One of the most devastating aspects of apartheid, forcibly imposed by the government, was the removal of black South Africans from farming areas designated as “white”; they were trucked to the “Homelands” and their land sold at low prices to white farmers. From 1961 to the end of apartheid, more than 3.5 million people were forcibly removed from their land and houses and deposited in the “Homelands” where they plunged into poverty and hopelessness. 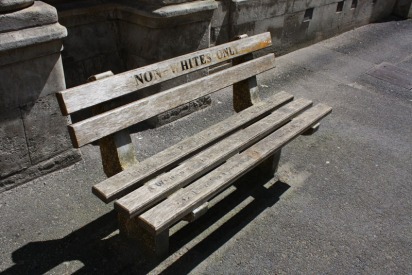 Resistance to apartheid within South Africa took on many forms, from non-violent demonstrations, protests and strikes, to political action and eventually to armed resistance.

In 1952 the African National Congress, a banned organization under apartheid, organized a mass meeting during which attendees burned their pass books. Another group, the Congress of the People, asserting in 1955 that “South Africa belongs to all who live in it, black or white.” The government broke up the meeting and arrested 150 people, charging them all with high treason.

In 1960, at the black township of Sharpesville, the police opened fire on a group of unarmed blacks associated with the Pan-African Congress, an offshoot of the ANC. The group had congregated without passes.

At least 67 were killed and more than 180 wounded.

Sharpesville convinced many anti-apartheid leaders that their objective could not be achieved by peaceful means. The ANC and PAC established military wings. By 1961, most resistance leaders had been captured and sentenced to long prison terms or executed. Nelson Mandela, the founder of the military wing of the ANC, was incarcerated from 1963 to 1990; his imprisonment would draw international attention and help garner support for the anti-apartheid cause.

In 1976, thousands of children in the black township of Soweto, outside Johannesburg, demonstrated against the requirement of the Afrikaans language being a mandatory subject taught in their schools; the police opened fire.

The protests and government crackdowns that followed, combined with a national economic recession, drew more international attention to South Africa and shattered all illusions that apartheid had brought peace or prosperity to the nation. The United Nations General Assembly denounced apartheid and in 1976 the UN Security Council voted to impose a mandatory embargo on the sale of arms to South Africa.

Under pressure from the international community, the government of Pieter Botha sought to institute some reforms, including abolition of the pass laws and the ban on interracial sex and marriage. The reforms fell short of any substantive change and by 1989 Botha was pressured to step aside in favor of F.W. de Klerk.

Despite strong and consistent opposition to apartheid from within and outside South Africa, its laws remained in effect for the better part of 50 years. In 1991, President F.W. de Klerk, working closely with freed Nelson Mandela, began to repeal legislation that provided the basis for apartheid. A new constitution, which enfranchised black South Africans and other racial groups, took effect in 1994; elections that year led to a coalition government with a non-white majority, marking the official end of the apartheid system.

As I wandered the streets of Cape Town and other cities and towns in South Africa it became apparent there was still a large population of whites that held resentment toward the change. They said the right things in conversation but would slip all too often and the ideals of a past era would rear their ugly head.