Traveling by bus in most developing countries can more often than not be an exercise in patience and mental fortitude. From the bus depot to the “middle of nowhere” where you will inevitably break down is an adventure all its own. The journey will be fraught with time delays both mechanical and cultural; if you have a schedule, forget it…it will be of no use.

The landscape will no doubt be gorgeous, the weather warm, skies blue, and you will be in the same figurative boat as many others; in that you find comfort. There will be laughter and chatter as the bus departs and turns in the direction of its destination.

From here it is just a matter of time before an “oh-so common” scenario will play out.  Brace yourself as there is almost no way of getting around it. Take a deep breath, relax, and console yourself with the fact that all control of your day has now been relinquished.

Crossing the border into Zimbabwe should be more of a formality than an ordeal but as these types of international transfers tend to be more a reflection of the border guards day than any kind of bureaucratic process the extremes to which the pendulum will swing are great.

Every single passenger was searched, every bag removed, opened, and rummaged through. If this was America I would be pissed but overseas I have a much more tolerant outlook. Besides the fact that an angry foreigner digs his own hole, it is just so much easier to go with the flow. The locals do it. Why not the foreigner; after all we are the guests, invited or not.

With the bus packed and ready to go we continue into Zimbabwe; passports stamped and anticipation on the rise. It is now, it is always now, that a cylinder will cease, the radiator will leak, the bus will hit a tree, or the more common exploding tire will occur.

Usually in developing countries an event like this seems to stir the local men into some kind of action. I am never sure exactly what it is but I believe their intentions are good.

They do a lot of mingling.

Mingling is big here in Africa, and in Asia. From the mingling you assume a decision will be made on how best to approach the problem. That is always a bad thing to assume.

What typically happens first is that a third of the men just depart without any action being taken for the benefit of the bus or its passengers.

A portion will remain huddled, presumably discussing the issue but in actuality it can often be fair to say that someone has broken out a deck of cards or brought up a far more interesting topic to discuss.

The two men that are finally left approach the wheel looking perplexed. One hand clutching a  tool, usually a hammer, the other hand being used as a head scratcher. Neither men inducing confidence in the passengers who are strewn about the roadside waiting and watching…sometimes cooking! 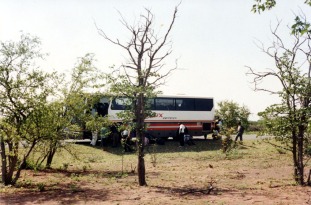 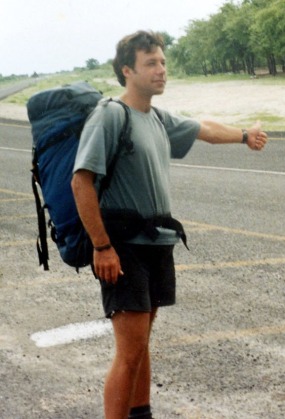 Immediately upon breaking down, the bus driver jumped on a passing truck and headed back to the border for help. He was never seen or heard of, by us, again.

The two other drivers attempt to fix the overheated engine by pouring water on it. After the steam clears we now have a cracked head and oil begins pouring out onto the road.  At times like this is a good thing to be able to see both adventure and humor so with this accomplished I begin to hitch-hike.

A vehicle stops. I urge the driver to take with him the pregnant woman, she was eight months along, and her elderly companion on to Bulawayo. He does and now I begin the task of thumbing a ride for myself.

A truck stops and I am run over by Africans clambering to board. A pickup truck stops next. Nine more African men hurl themselves on board leaving me “snoozing and losing” with two feet on the burning tarseal of the road. The driver is clearly upset as he only intended to offer a ride to two.

We work it out with money and load the luggage. It is a squished journey in the heat of an African midday sun but at least we were heading in the right direction at last. We must have looked like the Beverly Hillbillies truck as we sped through the Zimbabwe countryside.

The ten of us in the back had a true bonding experience over the next 300 km; jokes were told and laughs were had. Introductions and stories exchanged as the clothes on our backs became saturated with sweat; not a cool breeze to be felt. We were driving in an oven.

It was so hot my flip-flops began the process of slowly melting.

Our arrival in Bulawayo was a bittersweet relief. We all pitched in and handed the driver the appropriate amount of money and went our own ways. My destination was now the Hitch-Haven hostel and what a sight that was when I finally entered the gates of this old English manor in the heart of the city.

Tonight I ate a meal of 29 mopane [mo-pa-nee] worms; the plate had 30 but I just couldn’t eat one more. These yellow and black striped worms are a great source of protein for millions of Africans so figured it was ok for me to.

I was feeling good about Zimbabwe and tomorrow I had big plans; tonight I slept well.