The flight home, all in all, was a bit of a disaster but one of the brightest parts was while boarding the second leg at Frankfurt International Airport.  This is an airport I despise and will do my best to avoid at all costs. Over the years any encounter with the Frankfurt Airport has left me in two minds. One is clearly frustration while the other is endearment.

If the truth be told it would appear that I have a mini love-hate relationship with an airport.

I remember one flight, back in 1988, from Rio to London which had a stop-over in Frankfurt. In Rio I had been lounging on the beach thinking my flight was at 6:30pm.  At 2pm I was still soaking in the days rays when I realized my flight really left three hours earlier.

All hell broke loose and my Brazilian friends accused me of being an honorary Brazilian but noted that this may not be working so much in my favor at this time. We raced
to the airport with me changing clothes en-route in the cramped two-door Honda.

As we approached the terminal a friend jumped out, ran to the security line and desperately pleaded with the officer to allow me through even though my gate had closed. Given this was 1988 and not END_OF_DOCUMENT_TOKEN_TO_BE_REPLACED

After wallowing in the pleasure of my early morning check-out I walked toward the town center and port area. In the light of day I found Corumba to be a jungle paradise; the complete opposite of what I expected following my inauspicious arrival only hours earlier.

Narrow streets lined with royal palms, warm blue skies home for hundreds of varied species of birds, waterways full of fish including the dreaded piranha, and a small population of the friendliest people I have ever met.

One of the first that I greeted was Catu; a self praised local guide who is a born and bred swamp man and therefore the Brasilian equivalent of Crocodile Dundee. With six others we hired him; at $12 per day as our guide for a four day trip into the Pantanal by jeep. It would turn out to be one of the highlights of my five months in South America.

After a five hour drive through a swamp teeming with life we set up camp next to a small lake which at that point was a welcome sight. With hot, sticky skin, swimming became the priority of the moment.  END_OF_DOCUMENT_TOKEN_TO_BE_REPLACED 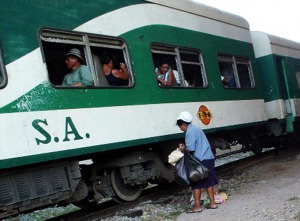 At 11:15 am one of the last remaining trains in Brazil pulls out of Luz Station in Sao Paulo. Its destination, which will take over 39 hours to reach, is the small swamp town of Corumba on the Brazil Bolivia border.

I had first read about this train in a newspaper while traveling down the coast. Everything about it captured my imagination and sense of adventure. Going deep inland to the furthermost corners of the Brazilian jungle, experiencing what few had experienced; this is the kind of travel I had yearned for and opportunity was knocking.

The journey spans almost the entire width of Brazil and is known throughout the country as the Death Train.  It was this name that made me veer west in my travel plans. At first I had thought the name had been earned for the fact that by the time the destination is reached you would probably feel, look, and smell like a corpse. Even though this assumption was not far off the mark the real reason was far more sinister.  END_OF_DOCUMENT_TOKEN_TO_BE_REPLACED