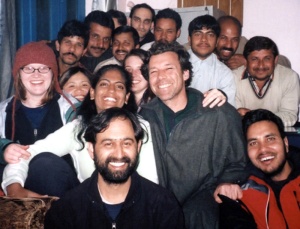 Food is one of the great joys of travel. Through the Himalayas we had eaten delicious meals prepared by a team of cooks that were part of our small convoy. They had done an incredible job;  on some occasions even taking requests.

Dinnertime would be shrouded in delight when a meal would arrive at the table that someone had quietly craved the night before. Generally over a beer the topic of what was most missed from home would arise. Undoubtedly someone would mention a food they could “Just About Die For”.  The following night the cooks would do their best to make sure this meal was no longer craved.

In days with a lot of heartbreak a dish of spaghetti and meatballs was a moving experience.

Up until Dharamsala, eating out at restaurants had not been part of the routine. There was not a single occasion prior to Dharamsala where we ate out. However here amid the snow and the peaks this would change.  END_OF_DOCUMENT_TOKEN_TO_BE_REPLACED

An Audience with the Abbot 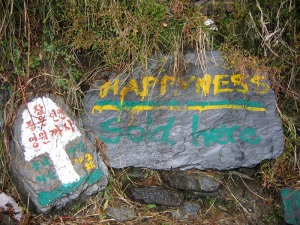 Our trip through the Himalayan Mountains of Himachal Pradesh was book-ended by Tibetan religious icons. In Solan, at the trips outset, we had spent two days working at the Menri Monastery; a retreat high and isolated, resting on a summit that overlooked a sprawling valley of green thousands of feet below.

We were introduced to Bon Buddhism by the monks that lived there; some as young as two or three and others as seemingly old as wind and fire. Temperature wise it was anything but warm yet the monks found little discomfort in the chill of their surroundings and with little more than a robe, slippers, and religious devotion they exuded warmth of spirit to a degree that is uncommon and took us all a little by surprise.

It was here we were fortunate in so many ways.

In Dharamsala, near the journeys conclusion, we were lucky enough to be granted permission, along with hundreds of others, to attend an audience with the Dalai Lama. Right now though we were about to meet the Abbot. Both were special but they were as different as a hug and a handshake.  END_OF_DOCUMENT_TOKEN_TO_BE_REPLACED

Shangri-La conjures up the image of an earthly paradise; a utopia located high in the Himalayan Mountains; a mythical paradise of happiness and isolation. Tibetan scriptures describe Shangri-La as having been created as a refuge for Buddhists during times of turmoil. 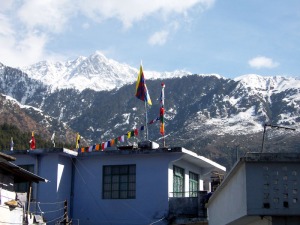 Anticipation and excitement is in no short supply at the entrance to the winding uphill thoroughfare of McLeod Ganj.  Laying in the shadow of its most auspicious neighbor this town of oil drums, wheel rim shops, and mechanics offers little to inspire a traveler. Glancing up though, that is where the magic happens. In the clouds, shrouded in a heavy ethereal mist is a city made famous as a refuge, the capital for Tibet’s Government in Exile; Dharamsala.

Like all roads routed through mountains the composition is that of hairpins, dead man curves, switchbacks, and steep grades. Like most Indian cities McLeod Ganj is dusty, dirty, chaotic, and noisy. It is almost as if McLeod Ganj is acting as a gauntlet through which you must pass in order to fully appreciate what awaits at the summit.  END_OF_DOCUMENT_TOKEN_TO_BE_REPLACED