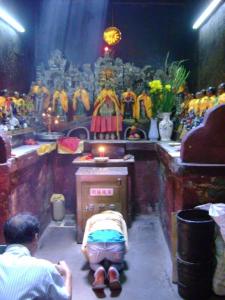 Like Saigon, Hanoi, is  a city that stirs the imagination into over-drive. Saigon is colorful and warm; enveloped in the friendliness a traveler through Asia would come to expect. Hanoi on the other hand is darker; more overcast and shrouded in brooding. It is a city somewhat stuck in the past; lacking the bright lights and glamour of its sister to the south.

In between these two cities is the DMZ; the demilitarized zone that separated north from south during the conflict of the 60’s and 70’s. The DMZ was eventually overrun by the north and Vietnam was reunited as a whole country however the scars which remain are obvious and the cultural differences and attitudes very apparent. Hanoi is one of those cities with an underbelly beckoning. A lure to a side of the city that is best left undisturbed; be enticed by the lure and you will undoubtedly wind up in the company of trouble.

For me, the stories of those seeking to explore the seedier side of Hanoi were enough to keep me on the surface. I had several weeks to travel in this country and I intended to follow through with my plans. For that to happen I required both paperwork and money and back alleys lined with various promises could be left for others. END_OF_DOCUMENT_TOKEN_TO_BE_REPLACED